so thats what thats for

The other day my friend and I went out clubbing and danced our little booties off.  I have never been good at dancing (and never will be) but I try, and I tried so hard to pop, drop, and lock it (or is it the other way around?).  Unfortunately, years of soccer and silly rough housing has ruined my knees and I just can’t get back up.

And now something that has been pondered again and again by various people who have no gangsta in them is why do they wear their pants so low?  With their cheeks hanging out and the crotch of their pants down to their knees, its not practical in the least.

Now with both of these things in mind, put them together and TA DA!  I get a ride back up and still get to be sexy!  Its so simple, I still get to try shaking it all the way down, and the very nice man grinding behind me gives me a lift on the low hanging crotch of his pants.  HOORAY!

in favor of microsoft, sorry

As the proud parent of an 80 gig Zune, yea, I support Mr. Gates, sorry IPod, I needed to make sure my baby was safe so instead of an IPoptart, I made a Zunetart!

Isn’t it cute!  I found a picture of an IPoptart and had to honor the other music media player in the same way (if not better).  it took me an hour and a half and cost eighty two cents for the felt, and now spreads tens of smiles.

I must admit, I have an IPod too.  It’s an electric blue nano but I just don’t use it as much.  The software is not as comfortable as the Zune and being technologically illiterate, it gets hinky with my ‘Pod.  I hope this isn’t an anti-apple sentiment because it’s not, the IPod is still a big part of my life I just felt more compelled to make the Poptart for the Zune, and that is why.

Starting to get a bit peeved with the Ieverything too.  The Iwords have moved beyond Pod, and now have books, phones, and a pad and its hurting my head a little.  Should we start to be worried about future Icontrol, turning it into IEarth, ruling through an IDictatorship, using IDinero, and buying IBurgers?

Still on a creative kick and after a few hours of internet surfing one day, I had enough inspiration to make a wallet.

I was flying blind on this project so it’s a little lumpy and the thread is already coming off but it was fun.  It’s just another thing that no one else in the world has.

Gotta keep myself busy somehow so i dabble in this and that.  Recently I dug out my old sewing machine and started messing around and last night, I made a dress!  No one else in the world has an outfit like that!

More of what makes me happy.  I hope to one day be able to do something with my sense of style besides just wear it.

the best state ever!

Colorado is the best state to live in!  I was born and raised here, my house is fifteen minutes from Denver and fifteen minutes from the rugged mountains, and I can experience every season in a day.  Yesterday morning, I woke up and left the house around nine in a skirt and t-shirt, the sun was shining on a beautiful seventy degrees; by two, Colorado was experiencing light spring showers and a few hours later, tornado warnings.  When I woke up this morning, the spring shower had returned only to turn to a winter storm by about ten o’clock.  Now, as I sit in front of my computer, the sun is faintly shimmering on melting snow.  Greatest place EVER!

As the snow started to fall, I felt inclined to step outside with my camera. 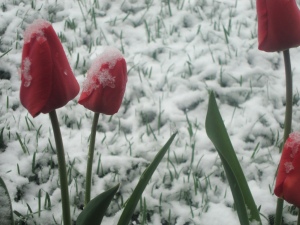 These are some tulips in my backyard that had just enough chance to blossom once before being frozen.  Poor dears. 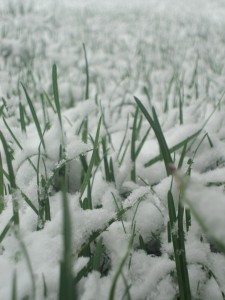 This is some grass.  I find shots like this to be very humbling, especially since it’s dark (it was cloudy).

I don’t want to stay in Colorado forever, there’s a big wide world out there, but I will always come back to it.  It’s home.

what is this crap

I have been working part time at an ice cream shop for about a year and three months now and I had my first performance review yesterday.  It went great, my boss is a great guy and had only had about three constructive things I really needed to work on, most of them applying to training new employees- and the rest was a pat on the back, keep up the good work sport kind of conversation.  I work damn hard and I know it!

So then why is it, that when the other two girls I was working with that night started belly aching that I started nodding in agreement?  They complained about the comments our boss had saying he had it out for them,  they didn’t like that they had to change their ways, and they especially blew their lids at the fifteen cent raise they each got.

“Yea, I know, right?!”  was all I said back to them.  Because the two of them aren’t as strong in the company, I lowered myself to their level, making myself seem as bad as them, despite recieving a positive review and a much heftier raise.  All I could do was pretend that all the hard work I do, didn’t matter and I wasn’t worth as much as I actually am.

Filed under the personals

Tagged as social issues, what am i doing!?, work troubles

love what that dr. is ordering!

Contemplating the beauty in things I have realized how beautiful Dr. Pepper is, strange no?  It’s a pick-me-up for more than just the caffiene, I love the chilling, bubbling feeling it has and the twenty three flavors thats not quite grape, or orange, and has a stand somewhere in the coke, pepsi, rc side of the spectrum.  So I did some digging and found out where this glorious beverage go it’s start

In 1885 in Waco, Texas, a young pharmacist named Charles Alderton started mixing his own soft drink flavors while working at a corner drug store, the one that would eventually become Dr. Pepper, stuck.  The name supposedly came from a Dr. Charles Pepper whose name became the title of an epic soda because of Alderton’s desire to marry his daughter, and i guess he didn’t get her.  Perhaps the reason is both their first names are Charles, and the poor girl would feel awkward calling that out in bed.

love weird info about wicked things!  And now here’s a great commercial, it makes me smile!

(Here’s the website i used, just for legalities! http://inventors.about.com/library/inventors/bldrpepper.htm)

Filed under the happy side

getting started is hard

This is like trying to swim blind through a sea of tapioca pudding.

Doing a lot of research for a paper I’ve been slowly trudging through, I realized how relevant “the cult of me,” or social networking has become.  Shared online opinions and thoughts have been running the world through the personal laptops of the everyday man, so, I decided to join in and see what I can learn about the world and myself.  Here’s hoping it turns out ok!